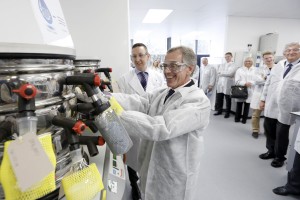 I’m not going to go into any detail about the opening of CRB’s new building, the Gardner Ratcliffe Building on Wednesday, 17thSeptember 2014, mainly because you can read a full account of the event. Instead, here are a few personal thoughts, observations and reminiscences prompted by what was a very happy day.

The first happy event was that both Dr. Joseph P. Gardner and Dr. Steven J. Ratcliffe were able to attend. I always thought that, unless you were Nelson Mandela, you had to be dead to have a building named after you. As I have known Steve Ratcliffe for many years, I was both happy and relieved to know that this wasn’t the case.

Actually, I haven’t known Steve for as many years as I ought because we only recently worked out that we were contemporaries at Oxford. However, Steve was a proper chemist, whereas I was a biochemist. We both worked on peptides after our first degrees – Steve’s DPhil thesis title was “Synthesis of Peptides related to Elastin” and mine was “Synthesis of Protease Inhibitors of Clinical Interest”. Steve worked in the group of the well loved and widely respected Geoffrey Young, who died earlier this year at the venerable age of 98. My supervisor was Robin Offord, who developed the concept of protein semisynthesis way back in 1969. Robin moved to Geneva during my DPhil (this seemed a little drastic – I wasn’t such a bad student!) where he is now founding President and Chief Executive of the Mintaka Foundation for Medical Research and also the President of the American Peptide Society.

While Robin’s group was world class in terms of protein chemistry, he felt my work would benefit from some advice from a real peptide chemist, so I crossed the road from the Department of Zoology (where the Laboratory of Molecular Biophysics was located in those days) to the Dyson Perrins Laboratory, which at the time was the home of Organic Chemistry research – and the Young group. I don’t remember much about my meeting with the great man, other than a strong recollection of what a kind, generous and helpful person he was. It’s quite possible I passed Steve Ratcliffe in the lab on the way to Geoffrey Young’s office, but we didn’t actually meet until some years later.

This meander down memory lane is prompted, in part, by the history of CRB shown in a timeline in the entrance to their new building. The company was founded in 1980 in Harston, near Cambridge, in a functional industrial unit that was nowhere near as impressive as the company’s new building. Nevertheless, CRB employed some of the UK’s finest peptide chemists over the years, including Eric Atherton who worked closely with Bob Sheppard to develop the Fmoc-polyamide synthesis method that is used by almost all peptide groups today.

Steve and I used to see each other regularly every two years at the European Peptide Symposia. I was working for Novabiochem (now part of Merck Chemicals) at the time and we always had a stand at the EPS. We would serve coffee and Basler läkerli(Novabiochem was based just outside Basel, Switzerland) in the mornings and beer and nibbles in the afternoon. The EPS was always like a big family – which was particularly true in my case, as my wife and teenage daughter worked on the Novabiochem stand serving refreshments. Steve tells me he always remembers my daughter Freyja serving him coffee. I doubt if Steve touched the beer, at least not at the start of the week; he would be in training for the Europe vs. Rest of the World soccer match that always took place on the Wednesday afternoon!

You would assume that someone who had worked for 34 years in Pharma research would have long since left the lab behind. So, I was amused when, during a tour of the new peptide lab, Steve was asked to have a go at freezing a peptide solution in a dry ice bath prior to lyophilisation. “When was the last time you did that, Steve?” I asked not expecting his reply: “About 2 weeks ago”! It was over the splendid afternoon tea at Crathorne Hall Hotel that Steve explained that, throughout all his working life starting with Beecham Pharmaceuticals and going through merger and reorganisation to what is now GSK, he had managed to stay firmly attached to the bench doing what he loves – making peptides and small molecules. Steve is now GSK’s amide bond specialist and, as such, is indispensible – which means there’s no chance of early retirement!

Just before I headed home, I took another look at the CRB history and timeline and realised that Alison White and Emily Humphrys are the longest standing owners of the business; they acquired CRB in a management buy-out in 2000. Having toured the new facilities, I could see why. The new labs are clean, modern and spacious and provide a great working environment with some state-of-the-art kit. This is a company that plans to be in business for many years to come, serving its customers well and succeeding because they are very good at what they do.