The Insulysin FRET substrate [Mca]/[Dnp] is a synthetic insulysin peptide substrate that contains an N-terminal fluorescent 7-methoxycoumarin (Mca) group and a C-terminal 2, 4-dinitrophenyl (Dnp) quencher. This FRET peptide exhibits internal fluorescence quenching when intact, however hydrolysis of the peptide between the donor/acceptor pair generates fluorescence, enabling the quantitative measure of enzymatic activity.

Insulysin, also known as insulin-degrading enzyme (IDE), is a highly conserved zinc metallopeptidase that contains an inverted zincin motif (HXXEH), characteristic of the inverzincin family of proteases. Insulysin functions as a dimer and exhibits allosteric kinetics, whereby small substrate peptides and polyphosphates such as ATP can act as enzyme activators. The endopeptidase cleaves a wide variety of substrates that are diverse in length, structure and sequence and exhibits a preference for basic or bulky hydrophobic residues.

Insulysin is ubiquitously expressed and is responsible for insulin catabolism and the degradation of many bioactive peptide substrates including glucagon, TGF-α, β-endorphin, dynorphins and atrial natriuretic peptide. Insulysin also selectively degrades amylin and β-amyloid amyloidogenic peptides at multiple sites. 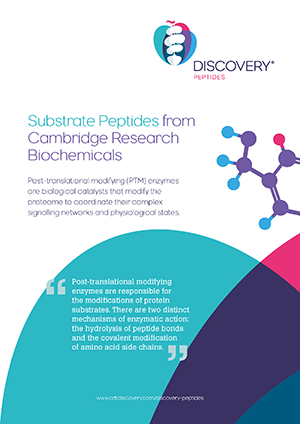