Histone H3 (1 – 20) is derived from the Histone 3 (H3) tail and is helpful for the epigenetic study of histone modification. It is labelled with the Aurora™ Fluor 647 fluorescent tag.

Histone H3 (1 – 20) is derived from Histone 3 (H3), which is one of the four core histones (H2A, H2B, H3 and H4) fundamental in compacting eukaryotic DNA into the nucleosome. The nucleosome arises when 147 base pairs of DNA wrap around a H3-H4 tetramer and two H2A-H2B dimers, forming the histone octamer core. H4 and H3 are highly conserved and perform roles in binding to segments of DNA which enter and leave the nucleosome and in chromatin formation. Like the other core histone, H3 has a globular domain and a flexible N-terminal domain, “histone tail” which can undergo modifications such as acetylation, methylation, phosphorylation and ubiquitination. Due to histones containing many lysine and arginine residues, they have a positive net charge which interacts electrostatically with the negatively charged phosphate groups in DNA. The transcriptional activation or silencing of the chromatin is controlled by ATP-dependent chromatin remodelling factors and histone-modifying enzymes which target histone proteins. Both processes alter the positioning of the nucleosome, allowing the DNA to be either available or inaccessible to the transcription machinery.

Histone tails can undergo multiple modifications, including acetylation, methylation, ubiquitylation and sumoylation.  The purpose of the modifications is believed to alter chromatin function/structure.  Histone H3 (1 – 20), with no modifications, is a valuable peptide in the study of epigenetics. It can aid in understanding interaction with histone effectors and the histone tail using crystallisation and pull-down assays on affinity matrices. Histone H3 (1 – 20)  is labelled with the Aurora™ Fluor 647 fluorescent tag. 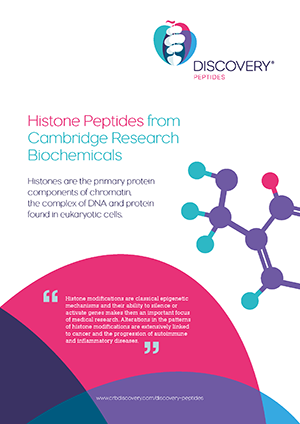