Ghrelin Rat/mouse orexigenic peptide hormone is modified at position 3 by a fatty acid. Ghrelin is involved in appetite stimulation and growth hormone release.

Ghrelin is a peptide hormone that typically has a serine at the third residue and relies on modification with a fatty acid to give ghrelin its functional activity. In its modified form, ghrelin is an endogenous ligand for the pituitary gland’s growth hormone receptor (GHS-R) and stimulates growth hormone release. Rat/mouse ghrelin differs from the human form at positions 11 and 12 (RV) in rats to (KA) in humans.

Ghrelin acts on the hypothalamic arcuate nucleus as an orexigenic agent to stimulate appetite. Ghrelin is produced in the stomach as a precursor peptide preproghrelin, cleaved to ghrelin. Ghrelin circulates in the blood and can cross the blood-brain barrier. Levels of ghrelin respond to fasting conditions and allow signals about the energy status to be transmitted from the peripheral organs to the central nervous system to maintain energy homeostasis. 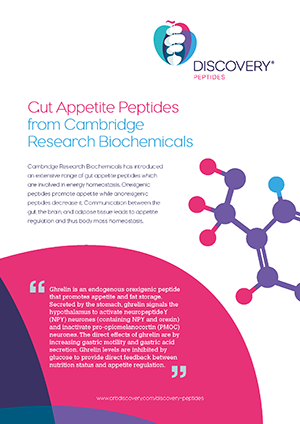